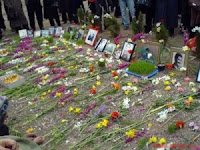 This year coincides with the twenty-fifth anniversary of the summary execution of the political prisoners in 1988, the event which the patriotic, progressive and democratic forces of our country justly named as The National Catastrophe. Following the defeat of Khomeini’s militaristic policies in 1988, and with a previously prepared plan, leaders of the Islamic Republic with Khomeini at the top, ordered the collective execution of the political prisoners. With this plan the government implemented a bloody cleansing and deprived the Iranian revolutionary and peace-seeking movement from its most prominent leaders and cadres. The aim of the reactionaries under Khomeini’s leadership was the elimination of the Iranian people’s progressive movement, and the patriotic and democratic parties and organizations. During this criminal massacre, the Iranian workers’ labor-union movement lost its most experienced and conscious leaders and cadres as well. In less than two months, and at the minutes-long court hearings, which were reminders of the Inquest Courts of the Middle-Ages, along with thousands of prisoners from the left and democratic forces, tens of experienced and qualified labor-unionists were executed.

To date, the reason and burial location of these peoples’ champions and defenders of workers have not been determined.

In unison with the progressive forces, labor unions and families of the peoples’ martyrs, the Iranian Committee for Labor-Union Relations demands identification and punishment of those who ordered and those who carried out these unforgettable crimes. We call for a unified struggle of all progressive and democratic forces to expose this haunting crime of the 1988 communal massacres of the political prisoners. We honor all peoples’ noble sons and protectors of freedom, social justice, peace and national sovereignty; and hail memories of all workers and unionists martyred at this massacre and all other martyrs.

The Iranian Committee for Labor-Union Relations
at ۶/۰۱/۱۳۹۲