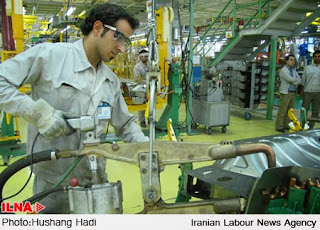 During the last few weeks, fiery discussions about Hassan Rouhani government’s Minister of Labor’s policies, the Ministry’s programs in the current conditions, and the role and position of labor organizations have taken place.

Ali Rabieih, as new Minister of Labor has put forward different programs, where none of them have significant and essential differences with those in the previous governments. However, one of the primary components of the Minister of Labor’s propaganda is based on “the need to pay serious attention to the tri-lateral” plan. Ministry of Labor, Cooperation and Social Welfare authorities have indicated that their policy on “tri-lateral” plan is different from that of the previous government. However, up to now they have not presented a specific plan in this regard and the subject of abiding with the articles 87 and 98 are still in a halo of ambiguity. In the past, the working class and our country’s toilers and independent labor-unions have always emphasized and stressed on the need for workers’ involvement in matters and decisions connected with the their lives. Up to now this plain demand has been ignored by Islamic Republic, and the response to the independent unions and labor activists has been summons, detention, torture and execution. The reason for all current detained workers and labor activists’ dismissal from work and detention, is their open and legal participation in the labor-union activities; for labor organizations’ involvement in matters such as wage determination; their genuine and active, not fake, participation in management of the Social Security Organization; and their right for organizing labor unions without the government’s and security organizations’ interference. Therefore, when defining “tri-lateral” plan, we must emphasize that it is not, and will not be, Ministry of Labor’s and government’s leading of the organizations, controlling and supporting certain organizations and then introducing them as “Social Partners”. According to the articles of the International Labor Organization, especially Articles 87 and 98, the right for organizing and collective-bargaining, have been recognized as two of the most unambiguous principles; while, in spite of recognizing those articles, the Islamic Republic has blatantly ignored them. In addition, the International Labor Union Charter, ratified by the World Federation of Trade Unions, clearly emphasizes on the workers’ and labor unions’ right for participation in decisions relating to their lives and work. A section of the Labor Union Charter indicates, “Workers have the right to organize labor unions or join existing unions; and without the management or government authorities’ permission or control, get involved in all union activities. At work or any other place, workers have the right to gather, discuss and present their ideas freely about all matters involving them.”

Another section of the International Labor Union Charter – the section concerning ’s right for representing the workers – indicates, “Labor unions have the right to defend all workers’ interests; and examine all matters involving the workers, state their opinion and interfere in those matter. Labor unions, including the labor unions in public service industries, have the right to negotiate with managers and government authorities and sign collective contracts…. Labor unions have the right to get involved in management and determining the policy of the social security organizations or all other organizations involving social affairs. In all matters involving workers directly or indirectly, labor unions must be consulted, especially, in formulating laws and regulations.”

Therefore, it is clear that demands of our country’s workers for active participation in issues connected with their lives and work is in line with the most obvious and well known internationally recognized principles. Thus, the concept of “tri-lateral” process, not in the altered framework practiced in the Islamic Republic, but on the basis of labor-union rights, as demanded by workers, labor activists and the existing workers’ labor movement. Concerning this, the Mechanical Metal-Workers’ Syndicate and the Board for Reconstitution of the Tehran Painting and Decorating Workers’ Syndicate’s first of September open letter to the Minster of Labor discusses several points. We believe that the areas emphasized in this letter, represent the most obvious workers’ rights; and the letter provides an accurate assessment of the labor-union movement’s responsibilities.

Another very important point in dealing with the Ministry of Labor’s plans and programs, and Ali Rabieih as Minster of Labor himself, is not to have an abstract and simplistic view. All Minister of Labor’s programs are within the framework of the government’s and the combined ruling class’ policies; and those programs should not be evaluated separate from the government’s strategy. Ministry of Labor’s “tri-lateral” plan is not an exception, and can not be; the government’s plans for privatization, deregulation of industries and joining the World Trade Organization (WTO), will have very serious and direct consequences and effects on the lives and job-security of the working class and toilers. We should not forget that reform of the labor law was compiled and prepared according to these policies. Therefore, the main task of the labor-union activists and independent unions is to pay serious attention to this matter and intensify the struggle for restoration of labor-union rights, and reinstate and establish legitimate labor unions on fitting class basis and independence. Only through such practices, affecting the current processes involving workers’ lives and work, will become possible; and to press on forward on the path for strengthening the ranks of the existing labor-union movement, by using all openings, current processes and existing opportunities.

At this time, more than ever the government’s labor organizations are becoming isolated and rejected. The need for presence of legitimate and independent labor unions has become an indisputable reality. Labor-union activity is an open and legal activity; and in the current critical time requires utmost insight and cleverness. To organize the current scattered protests and bolster status of the existing workers’ labor movement in the society requires a determined effort combined with patience and persistence.

In the coming months we will see implementation of certain policies by the Ministry of Labor. As of this moment, we must be ready to respond to the current needs and urgent responsibilities. The labor-union movement is at a critical juncture; and efforts must be made, that on the basis of class identity and shining historical traditions, this stage of the movement is completed, and it develops into an advanced stage.